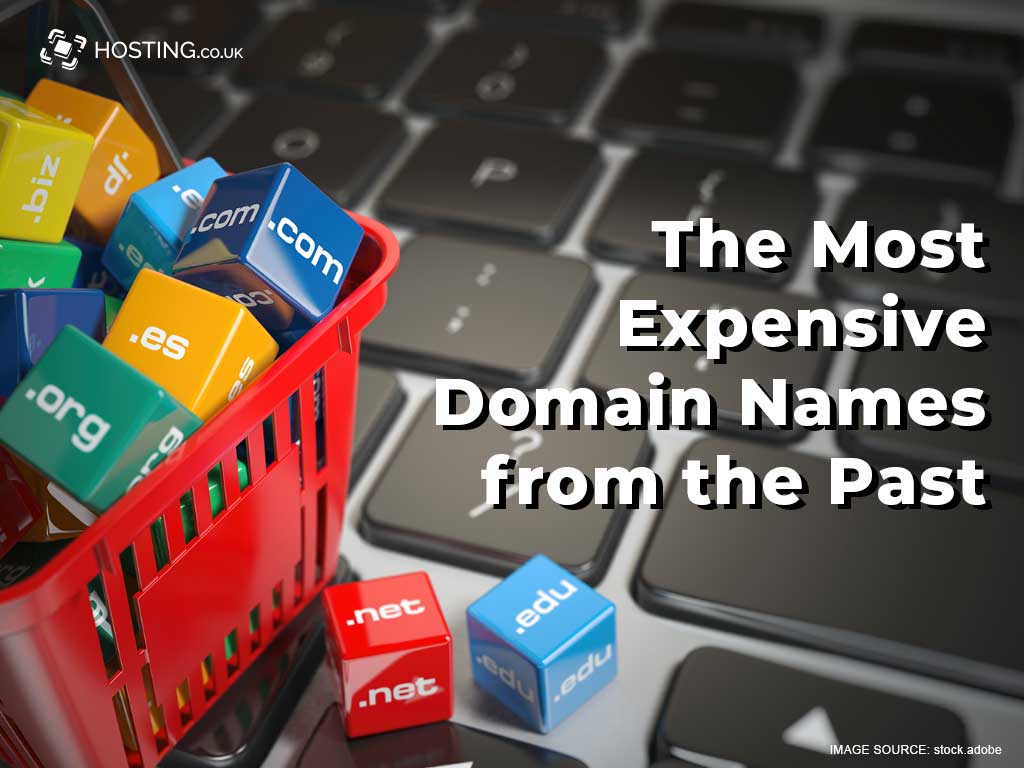 In 1985 there were just six domain names registered in the entire world. Fast forward to the present day, and that number has topped 363.5 million – with new registrations happening all the time. Over the past five years demand for domain names has soared, with global brands and small businesses competing for the snappiest, most memorable domains. But why have domain names become such a hot property, and how could the pricing of domains change over the coming years?

Our researchers delved into the 20 most expensive domain names of the past five years, looking into how their pricing has changed over time, and what might have caused these rapid price fluctuations.

A brief history of domain names

Today, the importance of a great domain name is well understood. Companies fight hard to register the domains that’ll attract their customers and boost their online business. But it hasn’t always been this way.

In their infancy, domain names were provided free of charge. This lasted until 1995, when a two-year registration of any domain was available for a set price of $100. But before long the real value of domain names was starting to be understood. As a result, prices began to rise.

Today, domain names can command incredible price tags, with some of the most popular domains reaching prices in the millions.

Early stories of headline-grabbing domain name purchases include the likes of VacationRentals.com, one of the most expensive domain name ever sold. Its buyer, Ben Sharples, purchased the domain name to avoid it falling into the lap of a competitor business, Expedia. Speculators have also driven the price of many domain names up. Domain name speculators such as Mike Mann have led the way in this area. In 2012, Mann registered 15,000 domain names in a 24-hour period.

All four letter domains in the world had been bought by 2013. That’s a total of 456,976 different combinations that have been snapped up by domain owners. And three character domains have been unavailable since 1997. However, new options are still becoming available. For instance, in 2014 over 100 different top-level domains were added. These include words such as .cars and .music, along with top-level domains that are clearly focused at certain brands, such as .apple and .hyundai.

Think about the most expensive domain names in the world, and you’ll likely be imagining top brands like Tesla and the famous purchase of voice.com. But which other domains have commanded eye-watering prices over the past few years? Take a look at the top 20 domain name purchases publicly reported* in recent years to see which ones are officially the world’s most expensive:

While some of these domains are immediately recognisable, others are less so. One of the key purchases here however is of course zoom.com, a brand that has become a household name over the course of the pandemic.

As the popularity of video conferencing rose all over the world, zoom.com quickly became one of the most visited sites on the web. It’s estimated that the site now receives 2.81 billion visitors per month, so the company’s 2018 purchase of the domain zoom.com may have been a wise investment!

Cryptocurrencies have played a powerful role in pushing up the prices of domain names. The world’s most costly domain name, hg.com, has seen a phenomenal increase in value over the past five years. In 2016 the domain sold for £2.66 million ($3.75 million), but recent estimates suggest that its value has now risen by 697%.

The involvement of cryptocurrencies in domain name price increases has been significant, and many experts believe that the increasing prevalence of these digital currencies has been a main cause of the rising value of domains.

One of the highest valued domains of the past five years, voice.com, is now estimated to be the most expensive domain of all time. The domain sold for £21.2 million ($30 million) to Block.one – the company behind EOS.IO, a blockchain powered by the cryptocurrency EOS.

Leading figures in the world of cryptocurrency are also snapping up some of the most wanted domain names. Elon Musk, the well known crypto-enthusiast and entrepreneur purchased the second most expensive domain name in existence back in 2018, on behalf of his company Tesla. The domain, tesla.com, replaced the slightly longer and less memorable teslamotors.com that the brand had been using until that point.

The purchase of tesla.com hadn’t been a simple one though. Musk allegedly fought for 10 years to buy the Tesla domain name, registered by a California resident well before he created the brand. It was finally bought for the considerable sum of £7.7 million ($10 million).

Whether you’re launching a brand new website or looking for new ways to attract the interest of online customers, a great domain name is of the utmost importance. Visit hosting.co.uk to register a new domain name in just a few clicks. With prices starting from just £1.99 for a year long registration, now’s the perfect time to secure the best domain name for your business.